For those of you keeping track on Twitter you’ll know I was lucky enough to venture over to Vegas last week to attend SHOT Show. In between titty clubs, time on the range, casinos, nightclubs and driving the porcelain bus I was able to get out and about and find some cool gear amongst the veritable jungle of tactical nylon, AR15s, promo-chicks and free pens. Here’s my take on the coolest swag at SHOT Show 2013. 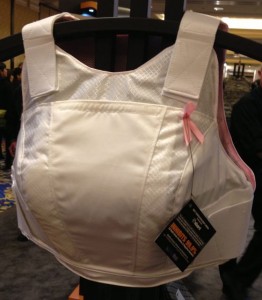 I’m all about asset protection and if it’s one thing the PRIMAL team definitely needs to protect it’s Saneh’s assets. This female-specific soft armor is available in a range of sizes and part of the proceeds of each sale go to support research into breast cancer, protecting puppies in more ways than one. 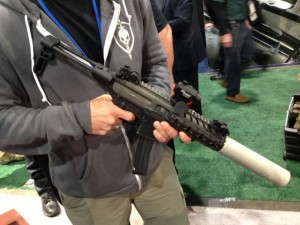 I saw more AR15 variants than any other weapon at the show.  The fuckers jumped out at me from every direction, by the time I was done I never wanted to see another black gun. But then this little bad boy caught my eye. The Sig Sauer MPX is a new SMG that rocks an AR15 style lower receiver for less training time. Chambered in pretty much anything you want it can even be tooled out with an integrally suppressed barrel…sweet. 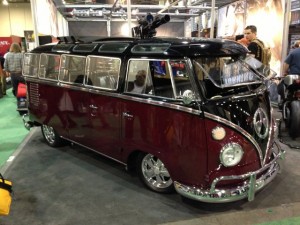 Zombies were soooo 2012. All except for this that is. Where I’m from these things are known for shagging and surfing. Trust MAGPUL to throw a mini gun on it and turn an icon of sixties flower power into a death wielding zombie-slaying death bus. 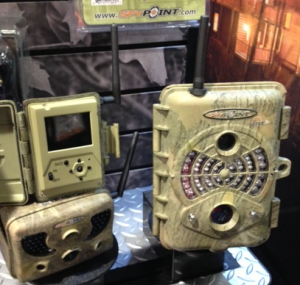 As far as tech goes I was really impressed by the gadgets at the Spypoint booth. Their latest remote cameras feature full-motion video, audio capture, night capability, and connectivity via wifi and 3G networks. These little bad boys are designed to monitor game trails and the like but imagine what Mitch could do with them; monitor infiltration routes, provide early warning, etc. Rig ’em up to some elec dets and you could lay a sophisticated ambush with just an iPad and a handful of claymores. Boom! 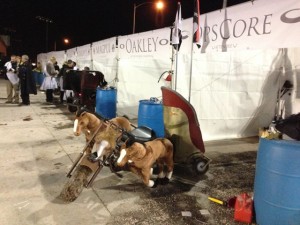 Probably the coolest thing at shotshow 2013 was the Crye Precision party. A whole bunch of tactical companies harnessed their chariots up to minibikes and raced around the track whilst a hundred or so lunatics (including myself) threw rotten fruit at them. Now that’s some serious fun. Jack Murphy put up a bit of video footage here.

So recently I’ve been copping a bit of heat regarding PRIMAL Fury. Fans have been messaging, emailing, tweeting, Facebooking… I’m surprised I haven’t had a damn carrier pigeon arrive at my house. The crux of it is this, you guys want PRIMAL Fury and you want it now. I’ve got some sad news for you team, it ain’t ready. It will be ready soon but clearly that’s no good to those of you wanting to read now. So in the meantime you can check out a few of my buddies who have new books out that are ready to go. These guys are independent, ex-military and pumping out some hard core action.

Jack Murphy’s latest is Target Deck. It’s high speed low drag violence. I recently caught up with Jack in Vegas and spent some time swapping stories over beers. This guy’s got his finger on the pulse.

New to the pack is Peter Nealen with Task Force Desperate. Pete was also in Vegas and he’s cut from the same mold as Jack, a great guy with a knack for story telling. TFD is the most realistic of the three and a must for military buffs.

Hank Brown’s latest Tier Zero is old school pulp fiction. Good guys killing bad guys with a tonne of gunfire and smattering of sexy ladies. What’s not to like?

So PRIMAL fans, quit your bitchen and get reading. If you’re not sure which one to read remember you can download a free sample from Amazon first.

I’m going back to PRIMAL Fury.