The latest 2022 FIFA World Cup bribery scandal surprised no one. The fact that Qatar was voted to host the World Cup despite being a desert hellhole, raised more than a few questions about corruption. However, the rampant media coverage seems to have forgotten the real issue, the exploitation of migrant construction workers. 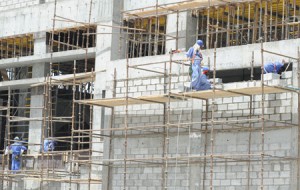 The poor bastards are dying at a rate of one a day, with the estimated death toll prior to the World Cup to be in the thousands. Living in squalor, denied their passports, unable to access to basic medical facilities, and forced to work through extreme temperatures, Qatar is treating third world workers as disposable slave labor. Fortunately international pressure forced the Qatari government to commission an independent investigation into how they can implement labor reform, or maybe just treat workers like human beings. Additionally human rights organizations, including Amnesty International, are attempting to hold them to account. Except, who would have thought, there has been no significant change. Nope, they just keep killing more of their disposable minions. Is FIFA going to do anything about it? Not likely considering they are still backing their choice of Qatar and aren’t even owning up to the bribery scandal. 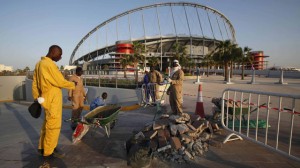 Qatar – perfect venue for the 2022 FIFA World Cup, just need to build everything from scratch and ignore the fact that no one will want to visit Qatar because it is in fact a desert sh@thole.

It’s almost like we need an independent organization to hold all these corrupt immoral douche bags to account. A covert team of pipe swinging, ninja fuckmasters immune to bribery and politics. Hard men and women willing to use any means necessary to fight for the oppressed. Before you get all excited you need to understand that these people don’t exist, at least not in the real world.  However, the exploitation of workers in the Middle East did provide the inspiration for the story of PRIMAL Origin, and yes in the story the douche bags get what they deserve. You can check out PRIMAL Origin here.

In the meantime if you want to do something positive send a big fuck you to FIFA by boycotting their bullshit events. Don’t even get me started on the sex-trafficking in Brazil for the tournament next month or how much of a Sochi-esque shitfight the 2018 event in Russia will be.