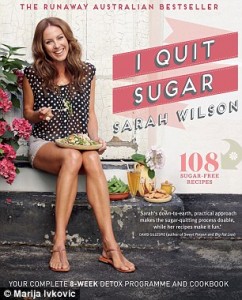 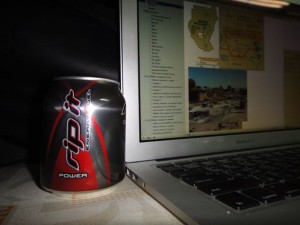 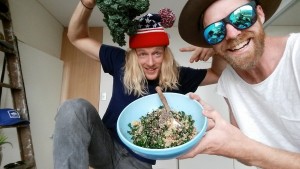 These people are fucktards!

I’ve got a buddy who swears by superfoods. So much so that he’s calling himself the Superfood Warrior and trying to change the way people consume food. And, while I find that admirable, I’m pretty skeptical of the whole movement. Don’t get me wrong, I believe in superfoods,  just not kale and acai berries. For me superfoods are coffee, steak, and milk. I mean, they make you massive and keep you awake, that’s pretty damn super. Anyway, my buddy convinced me that a breakfast smoothie would be a helpful addition to my diet, especially if it contained some basic superfoods like bananas, blueberries, brazil nuts, and some other seed-like crap that parrots eat. 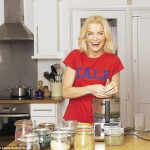 OK, I was a little dubious but there was no mention of kale or any other hipster shit so I thought, why not? I blended up all that stuff with a pint of milk, two scoops of protein powder, and a fist full of oats, and low and behold it tasted pretty damn good. Not to mention it kept me going till lunch without my usual raiding of the fridge.

Now, I’m not saying that I’m going to superfood smoothie every day, far from it. Bacon, eggs, and pancakes are still going to make a regular appearance on my plate. And, I’m not about to start drinking  green ‘spew’elina shit out of a mason jar and riding a fixie. But, my buddy the Superfood Warrior may be on to something with his nutrient dense breakfast smoothie. It may just keep the scurvy at bay and it sure as shit is better than ninety percent of the crap people eat for breakfast. I’d prefer to piss in my own eye than spoon Captain Crunch into my mouth.

So PRIMAL heavy hitters, get a smoothie in yah!

PS. Remember to sign up to the PRIMAL Intel database so I can let you know when the next book is out.

Ok so this story starts with my GF telling me she has a spare ticket to see Sleeping Beauty the ballet. At the time I was fully entrenched in a multiplayer session of Black Ops and two kills of a Huey minigun run. I looked up from the screen, gave her my most charming smile and said “Sure honey I’d love to do that.” The truth – I had no idea WTF she had just said. I was completely consumed by my hatred of wheelspinner44 who’d just ended my kill streak – mother f#cker.

Ballet? Sure babe sounds awesome! Said no man ever.

So two months later I’m dressed in a shirt and jacket and perched in something called the ‘stalls’. I looked around and noticed the joint was filled with old couples and chicks; it was then I realised I’d been sucker punched. The ballet started and at first I was pleasantly surprised. The stage was filled with women sporting legs that’d turn Liberachi straight. I was enthralled; they had power, poise, skill and most importantly, they were smoking hot. I must have had a grin on my face like the Joker because when I turned to face my girl she was giving me that one raised eyebrow look that immediately lets me know my reaction is taking me down a road of pain. “Such skill,” I mumbled as I adjusted my facial expression. Needless to say my joy was about to be thwarted!

Enter the Prince, AKA Mr Skintight. I’ve previously voiced my opinion regarding men who wear tights to train, no one wants to see your junk jiggling around, douche bags. Ballet is where the frog in a sock originated, it is the home of tight wearing junk jiggling. Don’t get me wrong the Prince was an impressive athlete. He bounced around like a Kangaroo on LSD. However, his jiggling junk significantly detracted from the performance, or so I thought. I looked across at my girlfriend and guess who was now wearing a grin like a Cheshire cat?

Ten minutes in I lean across to my girl and ask, “So when do they start talking?” She gives me one of those looks, the kind reserved for my extra special moments, “Darling, it’s a ballet there is no dialogue!” WTF? I’m at a complete loss for words, just like the production it would seem. Watching a performance without dialogue is like watching a Predator feed in Afghanistan, boring as shit! So just like in the Ghan I started to let my imagination run wild. Before I knew it the Prince had taken on the honey badger voice, particularly relevant when he was battling the witch who for some reason in my head sounded just like Oprah. Every character developed it’s own voice, the entire cohort of the Princess’s suiters became the Expendables as they pranced their way around the stage like a gaggle of homosexual conquistadors. Without gunfire, explosions and hand to hand combat, the fight sequence between the Witch’s minions and the Prince was lamer than Samsung’s defence in the Apple copyright case.

So for one night I was exposed to some classical culture, but most importantly I took away some important lessons:

1. Never agree to anything when playing Black Ops, MW3, Battlefield 3 or any other multiplayer game.

2. Ballet has no dialogue and should be watched slightly inebriated.

3. No matter how physically impressive you are, tights make you look like a douche. 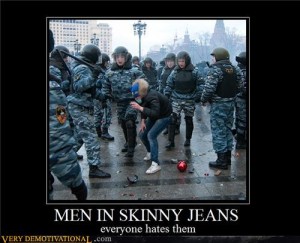 I haven’t blogged for a little while because I’ve been working on the new PRIMAL novel, I am calling it 4 until I come up with a cool name. Today I was forced to withdraw from the PRIMAL world of action, tech, fast cars, hot women and gargantuan explosions because of one thing… skinny leg jeans. What the fuck is the go with men’s fashion today? I went to a shop looking for a pair of jeans and the retail assistant asked me if I wanted a skinny leg variant. “Pardon me,” I responded with a puzzled look on my face. “Skinny leg jeans,” she replied giving me a look like I was some sort of window licking fucktard.  “Like these.” The clothing she held up had more hope of gracing the bridge of the Death Star than getting over my thighs. “Ah, no thanks,” I responded politely. I would have preferred to punch myself in the face with a fist full of gravel than wear that heinous item. “Fair enough,” she quipped.

Seriously though, since when was ‘skinny leg jeans’ acceptable attire for a man? When did we stop wearing stock standard jeans and start wearing skinny leg? Have I missed something? Because it seems to me that the generation of young men that are following in our foot steps checked their manhood at the door and signed up to the dress like a chick club? Hell don’t get me wrong, there’s a time and a place for dressing in female attire. Ask any Royal Marine officer, every chance they get a chance they don women’s clothes get drunk and set fire to shit. But there is no room in my day to day attire for skinny leg fucking jeans. 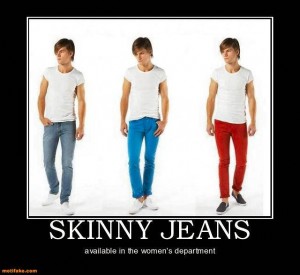 Our forefathers would take one look at skinny leg jeans and punch the wearer in the face. “How the hell are you supposed to ride a horse in that getup?” they’d ask as the accosted metrosexual updated his Facebook status with “Oh my god totes just met a cowboy lol” or some such piss. Men’s clothing used to be all about practicality, we wore jeans because they protected our legs from branches and stuff. We wore a suit because it made us look less like a meat head and more like a gentleman. There is no room in this equation for an item of clothing that makes us look like a woman.

What sort of real man could even fit into skinny leg jeans? You seriously need ankles like five year olds wrists. Nope when it comes to men’s fashion, in particular skinny leg jeans, Aerosmith said it best….. dude looks like a lady!